The devil ISN'T in the detail

With so much wrong with the club, it's very difficult to know where to begin when it comes to protesting.

Unfortunately, this plays directly into the hands of our owners - with so many groups and individuals, each with a multitude of axes to grind, there doesn't seem to be one core issue around which the fan base can coalesce and launch a protest. West Ham fans direct their anger towards the board during the Bond Scheme protests [Pic: Telegraph]

I realise that some on KUMB weren't born or are too young to remember, but during the Bond Scheme days we had a similar situation in some ways and yet in other ways things were very, very different.

Yes, the team was crap; yes, the owners were the epitome of evil etc - but when the Bond Scheme was launched, there was a unified reaction and it was a ONE ISSUE movement with such focus that ultimately the owners could not ignore it. And this was in the days before social media.

There were three fanzines back then - Over Land and Sea, On The Terraces and Fortuens Always Hiding - and between them and the fans a sustained movement was born which resulted in the death of the Bond Scheme.*

Fast forward nearly 30 years and with so many communication tools at our disposal and so many wrongs that need to be righted, how are we getting on?

Some two years ago, in March 2018, we came close to confronting the owners with a march until it collapsed in spectacular fashion just days before it was due to take place.

Aside from a few hundred protesters gathering below the director's box (myself included) and a coin being thrown at David Sullivan** we hardly channelled the spirit of the Bond Scheme protests. The only exception being Bubbles' symbolic seizing of the corner flag which was met with as many boos from those who had no idea what it meant as the cheers from those who did. 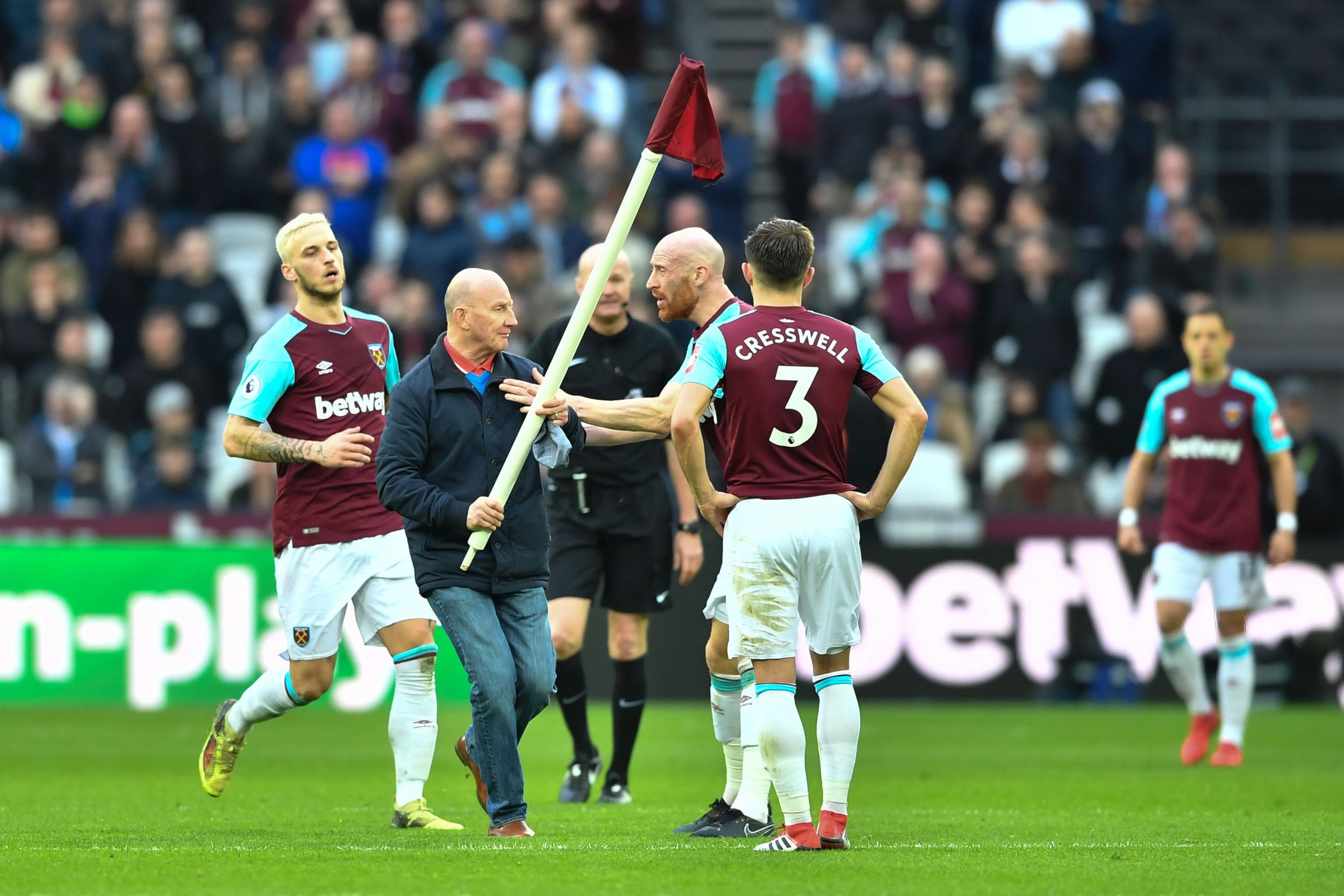 A West Ham fan recreates a scene from 1992 in 2018's protest during a match against Burnley [Pic: Standard]

I could go on and on for days and still not cover everything. But please believe this - whatever pisses you off, doesn't necessarily piss off the next person and this is where they will continue to divide us. However, the one thing that unites us all is the REASON behind whatever we find disagreeable at our club.

It is constant and it is identifiable - THE OWNERS.

If anything is going to change we need one clear point of focus - and in my opinion, it has to be the removal of THE OWNERS. They have had 10 years and look where we are. They are responsible for everything and they have to go.

There are people with far more influence among our support than most could ever hope to have and it is to them that I appeal. Please get together and hammer*** out a plan of action that everyone can get behind regardless of their individual and specific grievances.

Organise yourselves, then organise the fans and give us a platform on which to stand and oppose the root cause of all our problems. The angst and frustration is out there, it just needs to be harnessed.

* To cut a long story short(ish) - and I mention it here only because I know first hand what we as supporters were up against back in 1992.

At one point during the ongoing protests I came across a company that specialised in building sports stadia in such a way that there was a potentially huge financial benefit to a club like West Ham United that might make a Bond Scheme unnecessary.

I contacted one of the fanzine editors and ended up in a meeting between, among others, the three fanzine editors, Peter Storey, the architects West Ham had appointed and the sport stadia building company. The resistance coming from the club was astonishing to me.

I remember at one point that the three fanzine editors offered to pay for the sports stadia company to carry out surveys (there would be no cost to WHU for this) but this was rejected by WHU for reasons which to me made no sense - draw your own conclusions.

Anyway, after seeing what appeared to be a desire to proceed with a Bond Scheme at all costs, my resolve to protest against it was strengthened and this was true of the fanzines and their readers.

Despite being up against what appeared to be impossible odds, we supporters stood our ground and the end result is history - and, I might add, a proud one which we have all failed to live up to given the current state of affairs.

This needs to change and it is up to the fanzines of the 21st century, in all their many forms, to instigate this change.

** This definitely, 100 per cent, absolutely happened - because David Sullivan said so.