Striding swiftly away from Bramall Lane - the most sensible pace I can assure you all - the thought struck me. VAR is going to cause a real crowd incident sooner rather than later.

Sky's Jeff Stelling hit the nail on the head this weekend. "There could have been a riot." That was probably just a bit of overreaction, but witnessing the anger and frustration in Sheffield first hand, you can see something really nasty happening. Not maybe with our fans, but someone's, the sense of injustice is now palpable everywhere.

Embed from Getty Images
Rotten luck: ever get the feeling you've been cheated?

Of course I am not advocating such action, but there are folk a little more hot-headed than me. Our fans were enraged when Robert Snodgrass's supposed equaliser was ruled out by VAR, I believe some seats were broken, also it looked like one ended up on the pitch. Sometimes things have to be said; sorry, but you can understand if not condone the fury.

West Ham have suffered seven times with VAR decisions now, more than any other Premier League club. It could cost us our place in the top flight. There were clear similarities with Michel Antonio's effort at Southampton when a raised defensive boot smashed the ball into him from inches before he netted. The best moment of that match was ruined.

And it happened again against Sheffield United, maybe the roar that signalled the decision, which rightly upset Declan Rice, was their final revenge for Tevez. Who knows, but we should not be celebrating like that.

I just feel, now that this has gone on so long, with near blind indifference from the people implementing it all, that tempers could get frayed just a little too much. And whose fault would that be?

Their has been universal condemnation from the football fraternity. Rice pointed out the view of Premier League players, he could barely suppress his disappointment at the injustice of it all.

And no, I don't want to be lectured by patronising, dispassionate people in the posh seats, even the sanctity of the press box, pompously telling me these are the rules, get over it.

Sorry, it doesn't work like that any more. Now we have a specific handball law different for defending and attacking players. There have been more than a few instances of ball hitting arm or hand of a grounded defender from inches away, and that being termed unintentional. So the term does exist.

But if the ball smashes into an attacking player running at full pace, deflected, from a mater of inches away, that is enough to disallow the goal because there is no grey area in this new rule, brought in this summer.

I was in favour of VAR when it started. I felt it might iron out the problem of referees being influenced by massive home crowds, It hasn't done that. And it bothers me that a clip seen on Twitter of Virgil van Dijk with the ball bouncing up from his foot onto his arm, in the lead up to a goal, has also appeared. 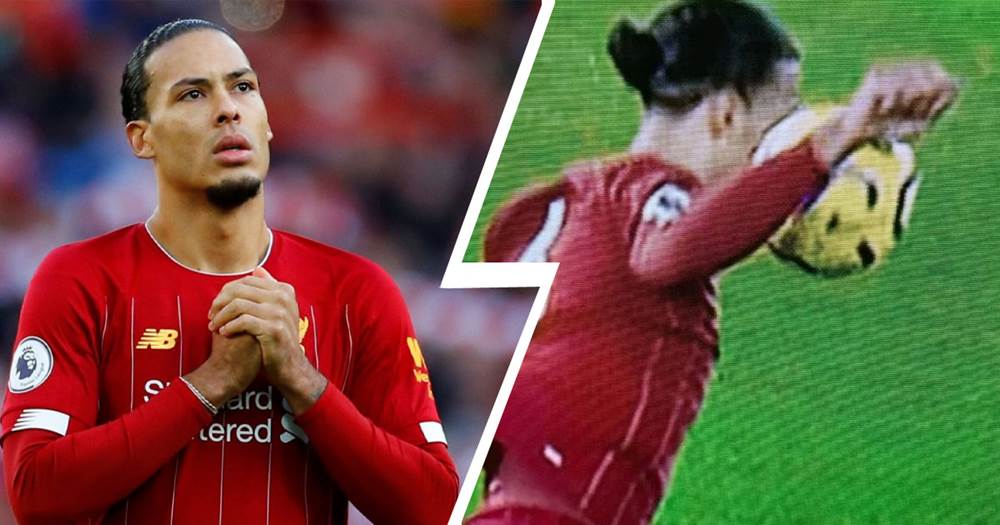 LiVARpool: This is not hand ball

The sheer nonsense of having a law changed to make VAR easier to administer, because that's why it was done, is completely wrong. It's 100 years since we were admitted to the Football League (I'm surprised the club haven't made more of this) and in none of those 100 years, would Snodgrass's effort been disallowed I believe. Until now.

It's a bit ironic that Sky personnel have been all over this, because Sky did more than most to get VAR installed. Now Jamie Carragher said this handball law is wrong, and the Saturday lads, Matt Le Tissier, Phil Thompson, and the frequently indecipherable Charlie Nicholas condemned it. The Scot reckoned the life is being sucked out of the game.

That's what it felt like in the away end, which had been rocking seconds beforehand. Some have had enough, it's not their game anymore, their enjoyment, the sheer thrill of celebrating a goal has gone... and all because of a fractional, unintentional hand ball 40 yards from goal.

Stelling was right, Friday night on the M1 is a road to hell, thousands of our fans travelled to be entertained, and this particular rule wrecked their night. That cannot be right.

UEFA have already told the Premier League that their interpretation of offside is way too rigid, all arm pits and nose hair. But Mike Riley and his people won't change, something to do with the integrity of the competition. Nobody mentioned integrity when the League Cup finds itself being refereed in two different ways, some games with VAR, some without.

So where are we? Furious and without any recourse. Fans' complaining will cut no ice with these people, but maybe Rice and the players will make a stand, maybe influential ex-players likewise. How long will be before something really unpleasant happens?

The sheer stupidity of staging this toxic clash with Sheffield United on a Friday night, with all its history and animosity, with an 8.00pm kick off, and no trains back to London for the West Ham faithful was evident for all to see.

We had been marched through darken streets from the designated pubs beforehand, through rows of police that reminded me of the days of getting from New Cross to the old Den.

On the way out, with all sorts happening around the stadium, the copper on the roundabout just said, "keep moving, it's just people shouting at each other". Yeah, right mate, but you wanted this game at this time, you sort it out.

Just look through the fans' comments on KUMB's Forum, and elsewhere. People are in hospital, others share lurid stories of their adventure in Yorkshire. I saw mounted police in the city centre... the last time maybe being the Miners' strike.

How did this happen? WHUISA are meeting our local plod, the very decent Met lads who police our games and want any opinions they can muster. So let's ask some questions. Why did South Yorkshire police, not known for their handling of football fans, agree to this game, being moved to this date?

Every West Ham away fan would have checked the train times back to London as soon as the match was moved. We all knew weeks ago that there was no return trains that night, so why did it take so long for people in authority to realise?

Basically, why were Sky allowed to get away with shifting this match to such a worryingly dangerous time? Were they looking for something? Contrary to belief, clubs get very little say in this and police also very rarely say no.

These opinions of mine come without prior knowledge of what was said and done, they are just observations from the front line, so to speak. Maybe many of these things were addressed and if so, I stand corrected. But it didn't feel that way on the ground.

Where do you start after the anguish of Sheffield United? We seem to be suffering on all fronts. VAR, please make it stop , not fit for purpose until the little people who run the game stop messing with the laws of football just to make the technology work.

Stuart Pearce said too much last time, not liking the fact that he never met David Sullivan or Karren Brady when he was last here with Moyes. More so, he was very critical of a situation that saw one agent having such a major involvement at the club.

How Moyes handles that will be interesting. It is hard to believe it wasn't something that the pair had discussed. Now it seems like the well-leaked early window targets have gone elsewhere and we seem to still be trying to sign an injured goalkeeper to replace an injured goalkeeper. Something of a unique position, that!

That we have an injury-prone, unbalanced squad is not Moyes' fault. That we are still facing a goalkeeping crisis is not his fault.

Blimey, how much cheaper and easier in hindsight would it have been to give Adrian the contract he wanted in the summer? But oh no, people didn't want to do that, to spend all that money for a goalkeeper to sit on the bench.

So we do it on the cheap, and then brag about it. And when David Martin gets into the side, someone at a very high level, I believe, said it wasn't bad for ?5,000 a week, while others are calling him a training ground 'keeper.

You know, I have never heard that expression in something like 50-plus years around football clubs, maybe I have missed something. And I've asked around too, with people who have been at big clubs. They were perplexed too.

But more importantly, why be so disrespectful, so insulting of a player who has at last fulfilled an ambition to play for the club he has always supported, the club his father played for with such distinction?

And still people want to deride him, because that is what this description is. Sorry, I should have let that one go, but it has annoyed me for weeks. And Martin should not carry the can for Sheffield United's winner alone. What the hell was Fabian Balbuena doing?

And so we go on. Seemingly trying to offload, on loan or otherwise, players who are constantly injured or just not good enough, because that seems the only way we can find money to bring players in. Not run like a circus any more? I leave that to you all to judge.

The genesis of our demise

The London Stadium: a day in the life