West Ham were sent crashing out of the FA cup after producing a dire performance against a previously mediocre West Brom at the Hawthorns this afternoon.

Although Tony Pulis' introduction has given the Baggies a new resolve and defensive backbone that may have been missing previously, there has been little evidence to suggest they were about to hit four against a weakened, yet previously firm Hammers defence.

West Ham, missing the likes of Andy Carroll, Winston Reid and James Collins through injury were strengthened by the return of goalkeeper Adrian, who was previously banned from playing today before his red card against Southampton was rescinded.

However that made little difference as the Hammers buckled against an Albion side looking unusually threatening in the final third.

It took the hosts just 20 minutes to make the breakthrough, which came from Brown Ideye's tap-in. Dawson evaded the clumsy challenge of Cresswell and raced away before centring the ball for the striker.

Replays indicated that Ideye was narrowly offside, but ultimately it mattered not. 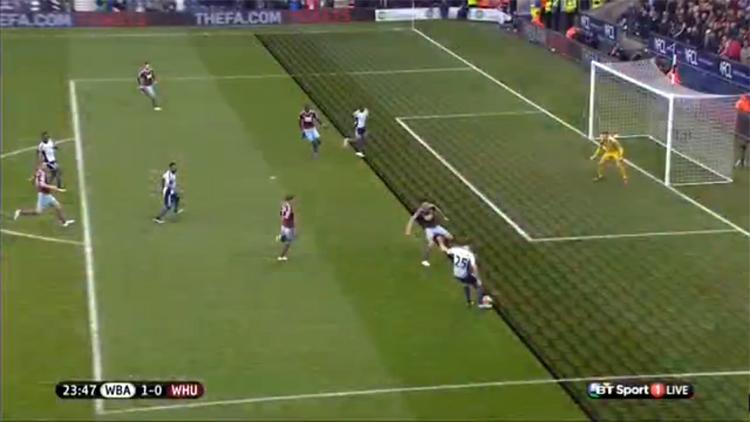 Just as it looked as if West Ham would go to the break just one behind, Albion added a second through Morrison. Unchecked and allowed to drive to the edge of the box, the midfielder unleashed a powerful drive that flew into Adrian's left hand corner.

It could have been even worse for the Hammers had Gardner's speculative effort four minutes earlier been placed millimetres lower; as it was, the ball crashed squarely against the bar instead of under it. Much to the relief of Adrian, who was well beaten.

Yet West Brom didn't have to wait too long to add a decisive third.

Just 12 minutes after the restart, Sessegnon beat Cresswell too easily on the right and his centre was headed home by Ideye, who had somehow managed to elude the attention of both Nolan and Kouyate - neither of whom had picked him up.

To add insult to injury, Morgan Amalfitano - who had only been on the field for ten minutes having replaced (the heavily-booed-by-his-own) Kevin Nolan on the hour mark - was sent off for two cautionable offences within a few seconds.

The French winger was issued a yellow card for a late tackle on Chris Brunt, then a straight red for reacting to Brunt's reaction by pushing the former Sheffield Wednesday midfielder in the face. He marched straight down the tunnel; Sam Allardyce refused to look at him.

By now in complete disarray, the Hammers conceded a fourth and final goal just sixty seconds after Amalfitano's dismissal. Once again Albion attacked on their right and Saido Berahino beat Adrian at his near post - not the first time the Spaniard has committed that particular sin.

Foster and Ideye went close to adding further goals, 25 years to the day that West Ham were beaten 6-0 in the first leg of the League Cup on Oldham's plastic pitch in the so-called 'Valentine's Day Massacre'. And as on that freezing cold night at Boundary Park back in 1990, the disappointment amongst the travelling fans was palpable today.

Sadly, that disappointment manifested itself in the form of ugly scenes involving co-owner David Sullivan outside the ground shortly before the final whistle, in which a group of fans confronted the owner to demand the dismissal of Sam Allardyce. You may read more about that incident here.

Next up for West Ham is the short trip to Tottenham, eight days from now. Sam Allardyce, who complained that his players were suffering with fatigue after today's game will have no such concerns then as the Hammers look to continue their good form at White Hart Lane.

Finally, on this day of all days, it would perhaps be fitting to end by recalling the old adage that states "the course of true love never did run smooth". All West Ham fans will fully understand the sentiment of that as once again, our hopes of lifting the FA Cup once again fade and die.

Who got a card on St. Valentines day? Anyone? pic.twitter.com/97FFMCAoTm