It's been a fairly tough week for those in the boardroom at West Ham - although it's difficult to argue their problems haven't been entirely self-inflicted.

Since Sky Sports were contacted by the club's legal representatives and asked to publish an apology relating to the nature of comments made on the broadcaster's Sunday Supplement show, the media's retribution has been relentless.

The Guardian, The Daily Mail, The Independent, The Telegraph and even The Sun - which counts West Ham vice chair Karren Brady as a columnist - have piled into the club following their decision to retaliate without attempting to address the issues at hand.

Liverpool fan Tony Evans, writing for The Independent produced what was considered to be one of the most scathing articles of the week when he concluded: "The club was transplanted from the earthy, rugged habitat where it had grown and prospered for more than a century into the antiseptic environment created for the 2012 Olympic Games."

Referring to the half-truths and blatant falsehoods told by the board prior to the move, he added: "The East End has had its share of silver-tongued hucksters over the years. This is the area that produced the clich? of the sharp-witted Cockney, the persuasive barrow boy.

"They have a reputation for being tough, cynical and hard to fool. That may be the most painful component of what has happened: they fell for Gold and Sullivan's shonky sales pitch."

Oliver Holt took a deeply sarcastic approach in his latest piece for The Daily Mail. "In the cause of striving for accuracy and fairness, I am relieved to have been so comprehensively re-educated in relation to the ongoing beneficence and altruism of Messrs Sullivan and Gold and Baroness Brady with regard to the wider football community," he penned.

"I wish to recant any previous statements which may have given the impression I believed that West Ham United had become a deracinated, hopeless, directionless, car crash of a club which has had its soul ripped out by Messrs Sullivan and Gold and Baroness Brady."

"They are not regarded as a progressive club when it comes to recruitment and, while people who have worked for Sullivan believe he wants the best for West Ham, some do not think he has a coherent vision for the future," he wrote.

"One former executive describes him as an expert at Championship level, before adding that Sullivan is too old school to succeed in the Premier League."

Even The Sun waded into the debate via writer Dave Kidd, who referred to the club's policy of banning writers who had committed the cardinal sin of producing negative commentary regarding the board.

"West Ham have now taken to banning newspaper journalists and dissuading radio reporters from interviewing supporters' protest groups," he wrote. "Perhaps they do so with the knowledge that so-called sports-writing associations no longer fight arbitrary bans imposed on their members."

And while referring to West Ham's 2019/20 Premier League campaign as "a clown-car ride," he added: "The proud public image of these sex-trade tycoons has been duly restored, with West Ham even trumpeting Sky's hilariously overblown apology on their social-media channels." 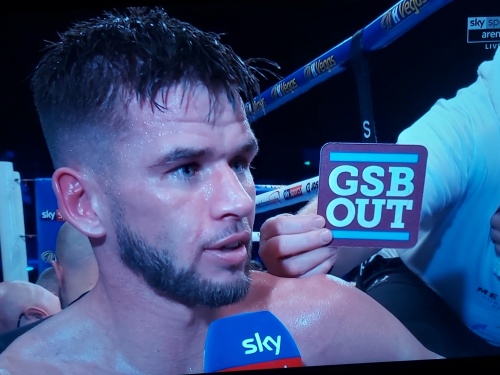 Disgraced TV presenter Richard Keys, no fan of Karren Brady's followed Kidd's example by referring to West Ham as "a car crash of a football club" in an article on his personal blog.

And The Telegraph's Matt Law - who was initially banned from media events by West Ham following his appearance on the Sunday Supplement before later being reinstated - has spent all week highlighting the board's shortcomings, such as in this example when he highlighted how co-chairman David Gold had liked a tweet which described disenchanted supporters as "morons".

To add insult to injury, a 'GSB Out' coaster was thrust in front of live TV cameras during an interview with Martin J Ward following his defeat of Mexico's Jesus Amparan last weekend.

Following such a terrible week in which their public image has taken a battering from all sides (Talksport and the Evening Standard excepted), one suspects West Ham's board might think twice before deciding to take the fourth estate - as the media is often referred to - on again.
* Something to say about this story? Please visit the KUMB Forum to leave a comment.